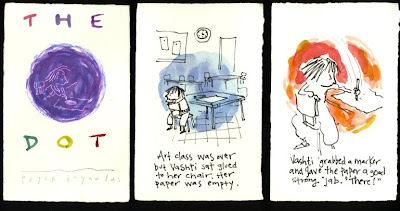 These are the rough color sketches that were my first attempt at getting my story "The Dot" out of my head and onto paper. If you know the book, you'll see I stuck pretty close to both art and text.

The following is the first question from a Q&A prompted by creative teacher extraordinaire, Julie Everett of Nebraska. I responded while in Bologna, Italy. I'll be sharing the questions and answers in my blog over the next week or so.
So... here goes:

1) Where did you
get the idea for The Dot?

Well, the answer to that one is actually in two parts.

I think the phrase “I can’t draw” - which I have heard countless times – has always surprised me – and has inspired me. My immediate response is “You just haven’t hung out with ME long enough!” I think that is what goes through any teachers or coaches mind when they hear “I can’t....” It just means we have to double up on some creative ways to get there.

So the theme had been brewing for years.

The catalyst for The Dot book was a mark I made in my journal. I make a habit of drawing and writing – as well as reading – before I go to sleep at night. Like many of us do after a long day, I can only get a few sentences read, a few words written or -- the very beginning of a drawing created before I have drifted off into sleep.

This one particular eve --back in 2001- in my 200 year old home in Dedham, MA, I set marker to paper and promptly feel to sleep. My Extra Fine Sanford Sharpie made contact with the white paper and began to drink in, ever so slowly, the ink. When I awoke perhaps an hour or so later, I was startled to see what my marker had left behind. A dot! A big black dot! I set the journal to one side and turned off the lamp.

Well, in the light of day, as the morning sun streamed through the windows falling upon my still-opened journal, I saw the dot.

It struck me that this was no ordinary dot.

It was mighty impressive.

What had started out as an unintentional “mistake” had ended up being a breathtaking dot! I quickly grabbed my marker and wrote “The Dot” above the dot and below I wrote “by Peter H. Reynolds.” I leaned it on my mantle above the fireplace and looked at it as the weeks went by and the story of a brave girl who makes an unexpected dot came in to focus.

The mission had found its story. The Dot was born! 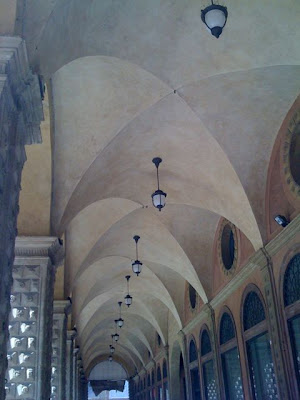 This time last week - I was sitting in a cafe in Bologna, Italy.

It was one of the cafes facing a great plaza - called Piazza Maggiore - filled with people.

I had a rare stretch of time where I just sat soaking in the scenery. Eventually, I looked up. There above me was a stunning ceiling. You'll see the photo I snapped with my iPhone. To me, it looks more like a painting than a photo! How many people pass beneath it without looking up and marveling?

I then looked down and snapped a photo of the ground. Big granite slabs polished smooth. The textured stone reflecting the sun made the stone seem alive. 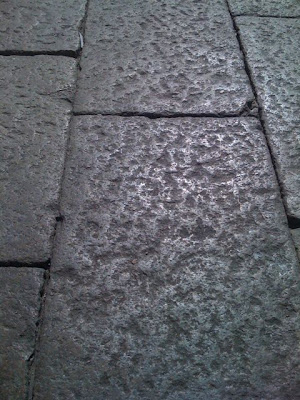 I am inspired to keep looking up, looking down, - savoring the hidden treasures hiding beneath our feet and above our heads.
Posted by Peter H. Reynolds at 9:42 PM 2 comments: