Early on in my children's book career, I was out in Greeley, Colorado attending the debut of a musical version of my book, The North Star. A local bookstore invited me to do a book-signing while I was visiting. I ventured to the shop which was located in a mall. I could tell it was a well-loved bookshop with narrow aisles packed to the gills with books. I ventured through the maze looking for someone in charge. I spotted an older woman who looked like she had been working -and perhaps living -in this shop for decades. Her eyebrow went up when she saw me.
"I'm Peter Reynolds. I'm here for the book-signing."
Her eyebrow lowered and her furrowed brow told me that she had no idea of who I was or what book I might be signing.  I was fairly new at all this and quite ready to help bring her up to speed. I mentioned a new series I was illustrating called "Judy Moody." I told her about my book "The North Star" and how a local Greeley music teacher and an accomplished jazz musician, Tim Beckman, had transformed my story into a musical and how I had attended a performance of it at the Union Colony Civic Center.
I was telling her all this as she shuffled down the aisles in search of, I was guessing, copies of my books to sign. She stopped suddenly and picked up a small blue book and swung around. It was a copy of "Mr. Popper's Penguins" by Richard and Florence Atwater released in 1938.
She pushed it a few inches from my nose for me to get a real good look at it and said, "Now THAT is a good book." 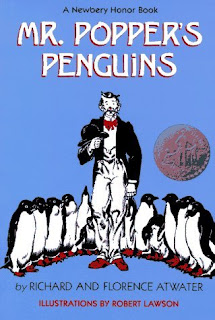 After recovering from my bewildered state, I found the section with my books and signed.
Before leaving, I did one last thing.
I bought a copy of "Mr. Popper's Penguins."
On the plane ride home, I read it.

She was right. It WAS a really good book.
Posted by Peter H. Reynolds at 9:11 AM 2 comments: