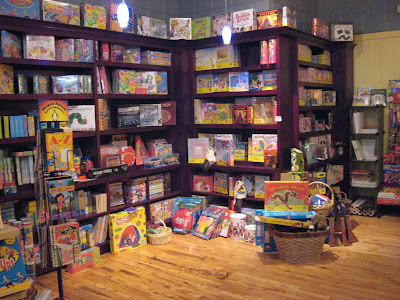 I love our family bookshop. It seems to have special oxygen that makes hearts beat slower, blood pressure drop, people smile. This corner, at The Blue Bunny, is filled with toys and art supplies. The art supplies are invitations for everyone to become brave people who know how to express themselves - and yes, and to draw, paint, write and read. The toys are, upon closer inspection, quite often group games or projects that encourage children to make things. Part of our mission is to help balance out a world that seems to have gone sedentary and screen-centric a worl dtheat seems to be forgetting how to make things (furniture, clothing, art, poetry), although with the current economy - we are seeing a trend toward "less is more." We have a classic Blue Bunny shirt with the "less is more" mantra!

The Blue Bunny is a stellar place in my universe.

For the first time though in my many years, I have begun to wonder what the fate is of, not only independent book stores, but of books, board games, even art supplies. The pen. I read a great article on the BBC website exploring the disappearance of handwriting. Think about it. Even signing our names is becoming less and less required. Many credit cards are beginning to just require a swipe. The BBC asked readers to submit a sample of handwriting. I did - to have mine on record for the historians. I tried to add it here, but Blogger is not cooperating! Could it be part of the handwriting-purge conspiracy? I'll try again later when they're not looking!

Back to my beloved books - not just the ones I write and illustrate - but all books. I am seeing the digital publishing revolution happening. Newspapers are some of the first victims. Readership down - economy down - there go the readers - there goes advertising. The economics won't support it.m (If everyone committed to buying the daily paper again - we might save the newspaper?)

Once the big ones go - so too will the small ones. I have talked to the owner of a small independent local newspaper. He explained that they could only keep it financially viable to "stay in the game" by "riding the coat tails" of the bigger presses who pay for the machines and allow paper being bought in bulk.

Our bookshop is currently doing well. Mostly because of the valiant efforts of our amazing staff. They'll be there as long as there are customers who appreciate the printed page. The printed page. How many people are using their printers to print out webpages?

We are, in a sense, selling data that could be - and will be - are actually are beginning to be displayed digitally - but also making them available in these handy, nicely-labeled, easy-to-transport things called "books." And unlike a bookmarked webpage, the data can be colorfully displayed on a physical shelf.

I had this sudden thought about the future.

Paul and Peter Reynolds glide in on their HoverChairs.

Cheers from the crowd of humans, robots, robotic animals and the sea of holographic visitors blurring together.

One young boy who had pushed to the front to see why the floating old men were getting such attention, something he rather fancied himself the expert in.

"Who are they?" he queried his Cyber-Nanny.

"They're the Reynolds brothers... They're run this souvenir shop."

"Well, its something to remember something by. According to my data files, humans once loved their internet made into paper souvenirs. They would print the pages onto the pulp made of trees and bind them into pages."

"Well, there are still people who collect these souvenirs. You've seen one I am sure. Before schools disappeared, there was one in a glass case at the middle school."

The boy was suddenly interested by one of the wrinkled twins throwing candy to the crowd.

The boy reached up and grabbed one of the flying treats.

It wasn't candy. It was a miniature paint set.

"I'll explain what that is later," his CyberNanny said, intercepting his thought. "Listen up. They're speaking."

The twins began reading one of these books. The crowd hushed.

"I know this story! I heard it in the Holograph Tube. Look! They've stuck it in one of those 'sooh-va-nears!"

After the event, the boy raced to their family's horse and buggy which was waiting for them in front of the The Blue Bunny, a souvenir tucked beneath his arm. The crowd poured from the store and there was a thunderous sound of excited voices and horses whinnying as they mounted their steeds to head home.

The twins hovered out of the store on their weird craft. They rarely took it out for a spin as they wanted to preserve this antique HoverChair.

"You think they'll ever bring back the HoverChair?"

"With energy credits skyrocketing these days... well, who knows?" shared the CyberNanny who had a strange feeling that her days were numbered.

."Sometimes we remember the things shouldn't forget," she shared quietly.

The boy wasn't listening. He was lost in his book.

I recently had the honor to read some recent work by the British poet. Joanna Curtiss from an unpublished manuscript. It is very inspiring to experience work fresh from a pen. Words arranged in ways I have never seen. Ideas unleashed from a mind - and set down on paper. And to be one of the first on the planet to bear witness to it.  Her words inspired me to open my journals and take a read of poems I have rarely shared. I like reading my unpolished work. Unedited. With words scribbled as fast as my mind could conjure them up!
It is my hope that my published work has this freshness and energy.
Posted by Peter H. Reynolds at 1:33 PM No comments:

I'm back. After a blog-pause. I had a bunch of friends wondering why I had stopped. January was a month so packed with events - trip to London and to DC for the Inauguration being the big pieces. I am not traveling all of February! A pause! A wonderful pause in my journey. These "between" moments are great times to create. My book, So Few of Me, is dedicated to that thought. Hope you take some time just for yourself. To think. To rest. To dream.
Posted by Peter H. Reynolds at 1:15 PM 1 comment: